University of Colorado Regent Glen H. Gallegos is a former educator and retired President of Operations at a family owned Colorado Construction Company. A Republican from Grand Junction, he was first elected to the board in 2012 and re-elected for a second term in 2018. Gallegos represents Colorado’s 3rd Congressional District. Gallegos graduated from Battle Mountain High School in Minturn, Colorado, but his family has close ties to the San Luis Valley.

Gallegos worked for 26 years in public education as a teacher, coach, principal, and Executive Director of Instruction for Eagle and Mesa County school districts. He retired in 1997 and joined the family construction business, The Gallegos Corporation, as president of operations, overseeing multiple projects in five different states and a workforce of over 1,000.

Gallegos was elected board chair in 2019 and again for 2020-2021. He served as the vice chair in 2016-2017 and has chaired the Regents’ Intercollegiate Athletic Committee, and the Audit, Governance, and Capital Construction Committees.

Gallegos served on the Colorado Mesa University Board of Trustees for a term that ended in 2010 and is currently serving on the Colorado Mesa President’s Advisory Committee and is active in Club 20 and Action 22. Both organizations serve the 3rd Congressional District, which Gallegos represents.

Gallegos and his wife, Diane, have been married for 46 years and have four children and four grandchildren. Daughter Erin recently completed her studies at CU Boulder. 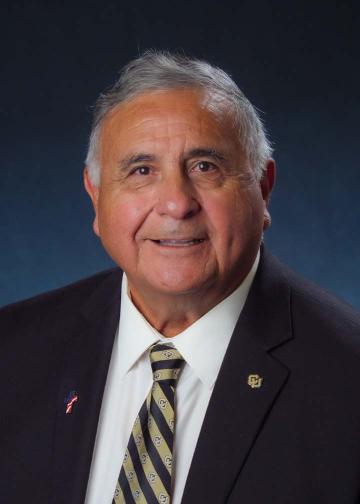